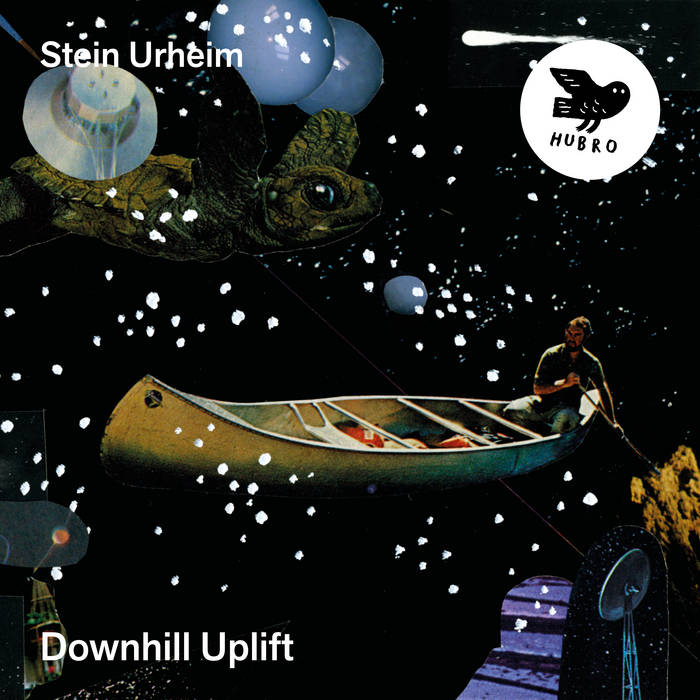 kralin Stein Urheim gets 2020 off to an absolute flyer. Echoes of Terje Rypdal get the album off to strong, heady start and it doesn't look back. Loads of stuff in the mix here. Gets better with each listen. Too early to make comparisons with 'Utopian Tales' or the excellent 'Strandebarm' but you're not wasting any money on this one. Another winner from Hubro.

For his sixth Hubro album, the Norwegian composer, bandleader and virtuoso guitarist Stein Urheim presents a new set of compositions for a specially formed group featuring three of his favourite musicians: bassist Ole Morten Vagan and percussionists/multi-instrumentalists Hans Hulbækmo and Kåre Opheim. Characterised by a relaxed, loose-limbed pulse rippling with cross-rhythms, and an epic, widescreen feel that can suggest the open vistas of the American west, the seven tracks function together as a kind of informal suite. Their strongly defined melodies and carefully layered textures evoke a luminously-coloured acoustic world where bucolic, country-rock tinged soundscapes meet world-jazz improvisations and a little of what might be termed pop-Americana.

As well as acting as composer/arranger and playing various guitars and related gizmos, Bergen-based Stein Urheim also sings on the album’s three vocal tracks, delivering his own eco-conscious yet teasingly enigmatic lyrics with a deep-voiced, Californian-accented charm. The result is a winning, immensely likeable and listenable collection of songs that matches compulsive tunefulness with superb drumming and enough expertly-played licks - including some killer bottleneck slide - to satisfy the most demanding of guitar fans. The contrast with Stein Urheim’s two most recent Hubro releases - the bare-bones solo acoustic set ‘Simple Pieces & Paper Cut-Outs’ , and the earlier concept album ‘Utopian Tales’ (a socio/musical investigation into microtonality and utopian communities, in whose band Vagan, Opheim and producer Jørgen Træen also appeared), could on the face of it not be greater, but there is a connection.

“Some of the music had its origin in the VossaJazz festival commission from 2016 that also resulted in the album ‘Utopian Tales, and the other tunes were mainly written in Berlin in the summer of 2018 during an artist-residency there” (the same residency that led to the creation of ’Simple Pieces & Paper Cut-Outs’), says Urheim. “I wanted to make a percussive album with a strong focus on drums, but with many ideas and arrangements for counterpointing melodies played with different stringed instruments, and vibraphone. I had also written lyrics for some of the tunes, and I wanted to see what it would be like to sing all of it myself. We did a three-day session at Paradiso studio in Oslo in December 2018 with engineer Christian Engfeldt. In early February this year I overdubbed all the rest of the arrangements with Jorgen Traen in Duper Studio in Bergen, where we also mixed and finished the production of the album. I really like listening to to this set myself, which is not always the case with my own music. It has a lot of layers, and the composed themes and the improvisation go hand in hand with each other.”

The album opens with the short but striking title track, a beautifully-played instrumental prelude where Urheim’s pedal-driven guitar almost seems to weep the melody like a saxophone solo. If the background of Indian drones and percussion already seemed reminiscent of the Impulse! recordings of John Coltrane or Pharoah Sanders, the subsequent track, ‘Brave New World’, accentuates the comparison, its opening riff sounding like a paraphrase of Coltrane’s famous 'Giant Steps’. As the initial riff is succeeded by a new, free-floating figure, it’s possible to hear further echoes of Coltrane’s wide-ranging influence, from the Byrds’ raga-rock classic ‘Eight Miles High’ to the epic space-jams of the Grateful Dead. The Dead’s rhythm guitarist Bob Weir compared his role to that of pianist McCoy Tyner in the classic Coltrane Quartet, serving up new chordal shapes for lead guitarist Jerry Garcia to run with. And so ‘Downhill Uplift’ goes, each additonal track revealing a further twist to the developing story.

Of course, Stein Urheim is his own man with his own music, but among the many pleasures afforded by ‘Downhill Uplift’ is the breadth of references it invokes. We also travel a long way from restrictive notions of what does or does not constitute jazz: from the gritty slide-guitar playing we might easily associate with Ry Cooder, David Lindley or Little Feat’s Lowell George (who recorded with jazz drummer Chico Hamilton), to ambient interludes of multi-tracked, overlayed guitars and guitar synths, to the singer-songwriter context of the very impressive vocal tracks. But despite its wilful eclecticism, Urheim manages to create an overarching mood and structure that allows ‘Downhill Uplift’ to function as a satisfyingly through-written suite. By alternating experimental instrumentals with strong sustaining themes and the occasional reward of a properly poppy, radio-friendly ear-worm, Stein Urheim has succeeded in creating a guitarist’s album that is defined by so much more than the guitar alone.

Additional overdubs and mixing in Duper Studio, Bergen, February 2019.
Arranged by the musicians and Jørgen Træen.
Editing, mixing, mastering and synthesizer on “Lamp” by Jørgen Træen.

Released with support from Fond for lyd og bilde