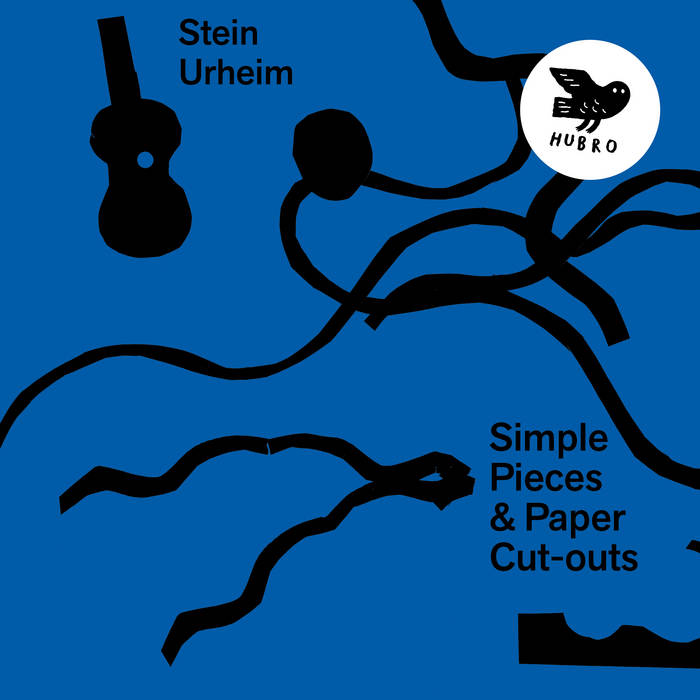 No-frills fingerstyle masterclass blends hard-won solo skills with superb audiophile sound on LP or download. It’s so good you don’t even have to play the guitar to enjoy it. If you do, there’s a 40-page musical score and tablature to help learn or adapt the tunes.

Stein Urheim’s beautifully-structured solo album, ‘Simple Pieces & Paper Cut-Outs’, provides a formally adventurous and sonically immaculate listening experience that at the same time acts as an inspirational masterclass for guitarists everywhere. Its relative simplicity also provides a sharp contrast to much of Urheim’s other work for Hubro, especially his most recent album, ‘Utopian Tales’, which featured a seven-piece ensemble, the Cosmolodic Orchestra, playing a set of tunes commissioned by Vossa Jazz and inspired by various experiments in communal living.

“The main idea for the album was that I wanted to do an acoustic guitar recording without any overdubs”, Stein Urheim says. “It’s all played on one particular acoustic guitar, with all of its sonic possibilities and limitations as the centre of attention. It’s a hand-made guitar, built after a model of the Selmer jazz guitars of the 1930s, and it has a certain twangy mid-range that I thought worked well for these tunes. It’s really tempting for me, as you can probably hear on some of my previous work, to add voices and other layers of instruments and electronics and if I start going in that direction the ideas develop really fast. But here, in short, it’s just an acoustic guitar, lots of open space, no abstract concepts or huge arrangements. It can, of course, also be heard at a more technical level, as an introduction to open tunings, especially open G and D, for other guitar players and students. The accompanying musical score has a tablature as well, and it will make me happy if people use it and keep the music alive in their own way, with their individual style on their own instruments. But it’s not classical guitar, or meant to be played in a very strict or composed manner. It’s open to change and interpretation in any possible way. Most of the pieces are quite easy to play, while some have more rhythmical obstacles and challenges for players not so familiar with finger-picking or bottleneck/slide guitar technique.”

On listening, the first thing you notice is the immediacy of the sound, as if you are hearing it from inside the belly of the guitar itself. An opening moment of silence - the movement of air around the microphone - is interrupted by a softly-strummed series of chords whose subtle progressions recall the successive gradations of pigment on an artist's colour wheel. This prelude, ’Slow Reader', (balanced at the end of the album by a symmetrical coda, ’Slow Reader 2’) is followed by a lilting Brazilian theme with a marvellously sprung rhythm whose stately measures seem to dance in the air. And so it goes: a masterly bit of bottleneck slide detours into the transcendental guitar territory of John Fahey; a cyclical blues riff encounters what sounds like contemporary minimalism; the jerky gait of an old-timey rag rubs up against what could be something by Rodrigo or Villa-Lobos. Whatever the style, the effect is complementary: an infinite variety of sounds all keyed to the same overarching aesthetic of clarity of intent and purity of sound. Stein Urheim’s ’Simple Pieces & Paper Cut-Outs, makes the complex appear simple and the simple shimmer with hidden depth, echoing the joyful colours and dancing forms of the Matisse papier colle cut-outs referenced in the title, reproductions of which Urheim would sometimes look at when he was composing the music while in Berlin last year.

The album is also full of surprising moments and, like the Matisse, exquisite formal invention. The sound of a peal of bells precedes the piece ‘Bells’, because, Urheim says: “the sound just seemed really good for starting the ‘Bells’ tune, with the right kind of dissonances before the opening chords. It’s actually a little field-recoreding from me walking by Westminster Abbey last summer.” Similarly, the thirteen tracks (two more are available as mp3s) are often short in duration but jam-packed with incidental details that reflect an experimentalist's regard for the value of sound as sound. "I get easily bored with very virtuosic playing, especially if you get the feeling that someone is showing off, which is very common in the guitar world.” Urheim says. "It can be fascinating for a short time but it doesn’t attract me or make me curious in a musical way. And many guitarists tend to use the same solutions to express themselves, for example by staying in the same tuning all the time. I hope this album's score can serve as an alternative: newly written but mostly based on old and traditional styles of playing that are relatively easy to master on many levels, while the recordings are meant first and foremost as an open listening experience.” Or as Urheim’s liner note for the album ends by saying: "Do with them as you like - and enjoy.”